For a long time already I’ve wanted to see the Kevo Canyon and visit Kevo Strict Nature Reserve, and finally at the end of July me and my friend headed to Sulaoja, the starting point of our four-day hike. After 63 kilometres we were supposed to end our trip in Kenesjärvi, where my car was being transported for us. The 40 km long and at some places almost 80 meters deep canyon-like valley of the River Kevojoki forms the core of the area. The rest of the nature reserve is fell highland and large tundra-like open mires.

We filled our water bottles at the Sulaoja spring, and continued in the magical light of the nightless night along the esker that winded through Lake Luomusjärvi. According to the guest book of wilderness hut Ruktajärvi, there had been people every day during the summertime, although by now we hadn’t met anyone. Typically people seemed to hike the canyon route in three nights, or some were just visiting the wilderness hut or the magnificent waterfall of River Fiellu. Apart from the trail to Kevo Canyon, there is also another trail that takes hikers to Kuivi fell, and then back to Sulaoja. Eventually, we were always the only ones in the camping sites and met only about a dozen other hikers. 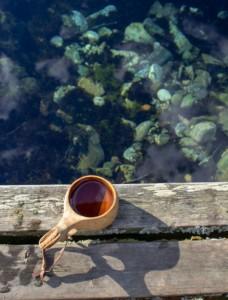 In the Strict Nature Reserve, camping is restricted to the designated campsites and walking to the marked paths. There are loads of stairs to protect the fragile nature and also to help the hikers in the demanding hills. All the services along the trail were maintained and in superb condition – dry toilets were clean, river crossings felt safe and campfire sites were accompanied with firewood (although during the dry and hot summer the forest fire warning has been on and campfires have been banned).

The rocky hiking trail of Kevo is easy to follow, but the difficulty is in the ups and downs along the route. At times the path goes down to the bottom of the canyon, and in other places up to the highland. The views are magnificent, not only the gorge valley itself but also the highland with its mires and of course the Fiellu waterfall.

On the second day, we had our first river wading of the three crossings on the trail. At the wading places, there are wire ropes to aid hikers in wading across rivers. After having lunch at the camping site, we went to admire the magnificent waterfall of Fiellu followed by yet another steep climb up to the highlands along the rocky path. 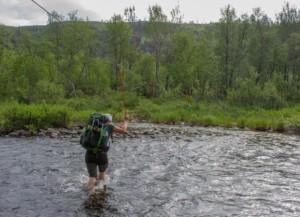 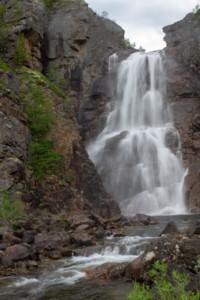 In the middle of a summer storm

The weather forecast had “promised” only sunshine. Thanks to brief internet access along the way, we found out that a summer storm was approaching. By lunchtime, we could hear and see the thunder coming closer. When we felt the first raindrops we immediately set up our tent. This was a good idea although there were only a few hundreds of meters to the next campsite. Suddenly it started to rain heavily, the wind was twisting our poor little tent. Thunder and lightning were constant. Somehow the steady drumming of raindrops lulled us to sleep and after an hour’s nap, the weather front had moved further North. We continued another quarter to the next campsite. There we were greeted by social mosquitoes and a refreshing swim in the beautiful River Kevojoki. 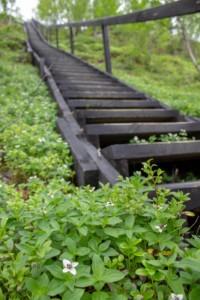 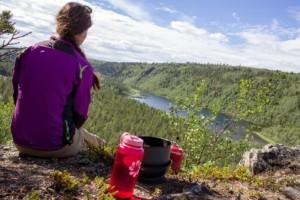 Our last hiking day was pure indulgence as we leisurely walked through old pine forests and duck-boarded mires. We had lunch by a cliff overlooking the canyon for one last time. Happy and well-rested, we filled our water bottles from a flowing brook one last time. Yet again we thanked the nature for this incredible experience.

Our four days in the nature reserve were filled with sunshine, swimming and silence. The magnificent views surrounded us at all times, and one thing is certain – we will be back.

Get to know the area